Diagnostic tests for diseases and drugs are not perfect. Two common measures of test efficacy are sensitivity and specificity. Precisely, sensitivity is the probability that, given a drug user, the test will correctly identify the person as positive. Specificity is the probability that a drug-free patient will indeed test negative. Even if the sensitivity and specificity of a drug test are remarkably high, the false positives can be more abundant than the true positives when drug use in the population is low.

To calculate this counter-intuitive result, we need Bayes' Theorem. A geometric derivation uses a Venn Diagram representing the event that a person is a drug user and the event that a person tests positive as two circles, each of area equal to the probability of the particular event occurring when one person is tested: $P(\mbox{user})$ and $P(+)$, respectively. Since these events can both happen when a person is tested, the circles overlap, and the area of the overlapping region is the probability that the events both occur [$P(\mbox{user and }+)$]. 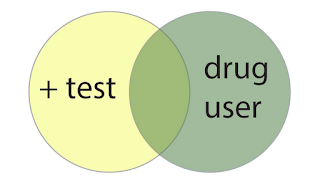 We write a formula for the quantity that we are interested in, the probability that a person who tests positive is indeed a drug user, $P(\mbox{user} | +)$, (Read the bar as "given that". This is a 'conditional probability'.) by acknowledging that we are now only in the world of the positive test circle. The +'s that are actually drug users can be written as the fraction of the '+  test' circle that is overlapped by the 'drug user' circle:
$P(\mbox{user} | +) = \dfrac{P(\mbox{user and } +)}{ P(+)}$.

We bring the sensitivity into the picture by considering the fraction of the drug users circle that is occupied by positive test results:
$P(+ | \mbox{user}) = \dfrac{P(\mbox{user and }+)}{P(\mbox{user})}$.

The reason for this surprising result is that most (99.5%) people that are tested are not actually drug users, so the small probability that the test will incorrectly identify a non-user as positive results in a reasonable number of false positives. While the test is good at correctly identifying the cocaine users, this group is so small in the population that the total number of positives from cocaine users ends up being smaller than the number of positives from non-drug users. There are important implications of this result when zero tolerance drug policies based on drug tests are implemented in the workforce.

The same idea holds for diagnostic tests for rare diseases: the number of false positives could be greater than the number of positives for people that actually have the disease.

[1] http://en.wikipedia.org/wiki/Bayes'_theorem See 'drug testing'. This is where I obtained the example.
Posted by Unknown