Check out these photos of the overgrowth of algae on a beach in China. There are two main probable causes. 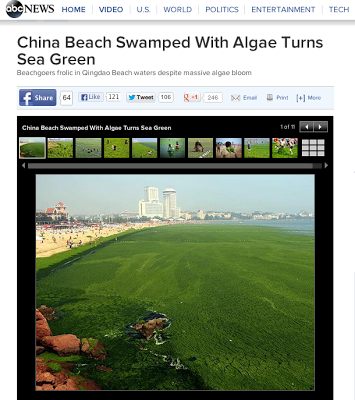 Pollution. Algae are autotrophs, which means that they synthesize their own carbohydrates, fats, and proteins from carbon dioxide and more basic chemical substances in their environment. In general, an algae population will keep growing until its resources become limited or a predator keeps it in check. Under normal conditions, the ocean water does not have enough nutrients, such as phosphorous, to sustain a large growth rate of algae. The resources are thus limited.

The fertilizers that farmers use for crops, which are high in phosphorous content, can "run off" into a river or directly into the ocean. Similarly, a chemical plant may pollute a river or the ocean with a substance high in phosphorous. In both cases, the pollution serves as a source of the limiting nutrient that the algae needed to grow, and an algae bloom unfolds.