Feel like your lovers had more lovers than you?

Most people have had fewer lovers than their lovers have, on average.

The fact that sex is symmetric makes this seem paradoxical. If person X slept with person Y, of course person Y slept with person X. So, how can we possibly expect that a given person has had fewer lovers than their lovers?

This is a form of sampling bias. As individuals, we are more likely to sample [sleep with] those that are more sexually active than others in the population, and this causes us to observe an average higher than the true network average.

In the extreme case, if person Z is a virgin, he or she cannot possibly count towards anyone's sample to determine the average number of lovers!

This idea of sampling bias is behind the reason "why people experience airplanes, restaurants, parks and beaches to be more crowded than the averages would suggest. When they’re empty, nobody’s there to notice." [Steven Strogatz, Ref. 1]

The paradoxical phenomena that most people have had fewer lovers than their lovers have also holds for our friendships. Your friends likely have more friends than you -- this is the "the friendship paradox" discovered by Scott Feld [2]. A study analyzing the social network of friends on Facebook (Ref. 3) showed that 93% of people on Facebook have fewer friends than the average of their friends's number of friends (Ref. 1)!

Finally, what you've all been waiting for. A proof of the friends paradox. A network of friends can be represented as an undirected graph $G(V,E)$. This graph $G$ consists of a set $V$ of vertices, representing people, and a set $E$ of edges, representing friendships. An edge connects two vertices. 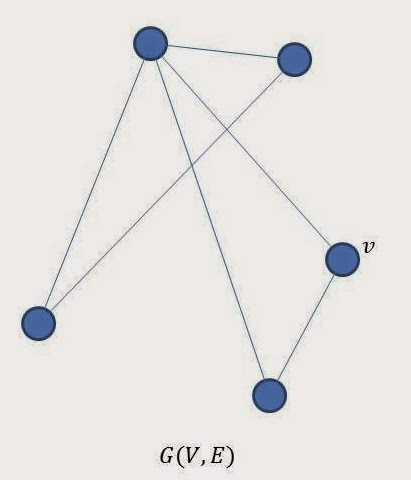 What is the expected number of friends a person has in our network? This corresponds to the expected value of $d(v)$ of a randomly chosen person in the network.
$E(d)=\sum_{v \in V} \frac{1}{|V|} d(v)$.
So we sum over all people and count their friends, giving each count a weight $\frac{1}{|V|}$ since this is the probability that the given person was the randomly chosen person (the same for everyone in the network).
This can be simplified by the handshaking lemma, which notes that if we loop over all people in the network and add up their count of friends to a total, we will double-count the number of edges in the graph. Thus
$E(d)= \frac{2 |E|}{|V|}$.